The History And Traditions Behind Funeral Flowers. 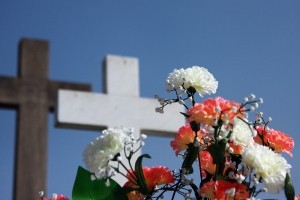 Flowers have always been a potent symbol for expressing many deep feelings. For both those who have skills with the tongue and pen, and those who fumble when it comes to vocalizing or writing out their feelings. While flowers have long been traditionally given at many different times to help express feelings of sympathy or condolence, sending flower arrangements to a funeral have also served an ulterior motive for many centuries. Herein is a brief guide to the different traditions and reasons behind why flower arrangements are almost always present at funerals.

In ancient and more recent history, they were used for their fragrance.

The art of embalming is one that has been slowly worked upon over the centuries. In ancient times flowers were not only tokens of respect, but they were also used as a means to help cover up the unpleasant odors of decomposition. Depending on the environment, condition of the body and delay of the actual burial from the time of death, flowers were used in varying quantities to allow the mourners to be able to tolerate the smell of the dead as they grieved and paid final respects to the body before it was interned.

There are two distinct instances in which this practice is speculate or documented. The first is a neanderthal grave in Iraq, the Shanidar Caves, was found with a group of ancient corpses with soil samples that support they had been surrounded in plant and floral remains. The second is the American President Andrew Jackson. He died at the age of 78 and by the time the funeral took place his body had begun to severely decompose. The stench from the closed coffin was so horrible that the undertaker at the time used a literal mound of flowers to cover up the entire coffin to contain it. The potent fragrance of the hundreds of flowers was just enough to overpower the stench for attendees to sit through the service. This particular act highlighted just how important flowers are for their beauty and scent. 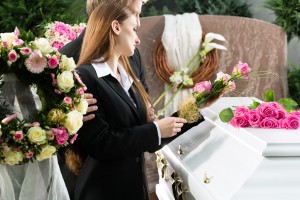 Aside from the practical use in covering up odors, flowers have also always served as sentimental tokens for the bereaved and by the mourning. In the Victorian era, where emotions were not discussed, funerals were often held in funeral homes, which served as a means of both silent expressions of emotion and made the smell of death tolerable. The deep interconnection between surrounding the dearly departed in the silent words of flowers has continued on as the other half of why flowers are commonly present at funerals. The secret language of condolence floral gifts is used to express everything that is too painful to speak of as well as help create a beautiful final memory. As humans, we tend to remember the life and death of those we love and the final memory of them is set at the funeral service. Seeing your loved one surrounded by beautiful and heartfelt arrangements of flowers can help create a lasting final impression during the funeral that can bring a smile to tears.

In modern times the use of flowers and their fragrance remain.

While the act of embalming and having higher standard and requirements for coffins, such as the Australian burial laws regarding how coffins must be able to contain these emissions when closed, there is still a need for their fragrance. Even with modern embalming there is still an odor to corpses that can cause added stress and discomfort for funeral attendees. This nearly indiscernible odor can be easily overpowered by floral arrangements. The use of the large funeral casket floral arrangements in particular stems from the old practice of using flowers to help mask the scent.  Surrounding arrangements are to a lesser extent a part of this tradition, though in many instances they serve more decoration than practical use.